Since last Thursday was the last public holiday (in Baden Württemberg at least) until October we decided to make the most of the day and head to the nearest country that was open for business, France. The weather turned out to be crazy hot so two and a bit hours in an air conditioned car was a fairly enjoyable experience, the driving itself was pretty unremarkable until we started driving past French fields of freshly cut hay. Suddenly there were storks, lots of them, just casually picking through the newly cut fields, one field had at least 10 storks in it. I’ve only ever seen a few and generally on their rooftop nests or soaring over our last apartment, they amaze me so much every time with their size (sorry to the Herons of GB, you are so small in comparison) and seeing them fly just makes me think of pterodactyls, is that just me? I was too busy gawking to take a decent photo but the scenery was gorgeous too. Dirty car windows, don’t judge. 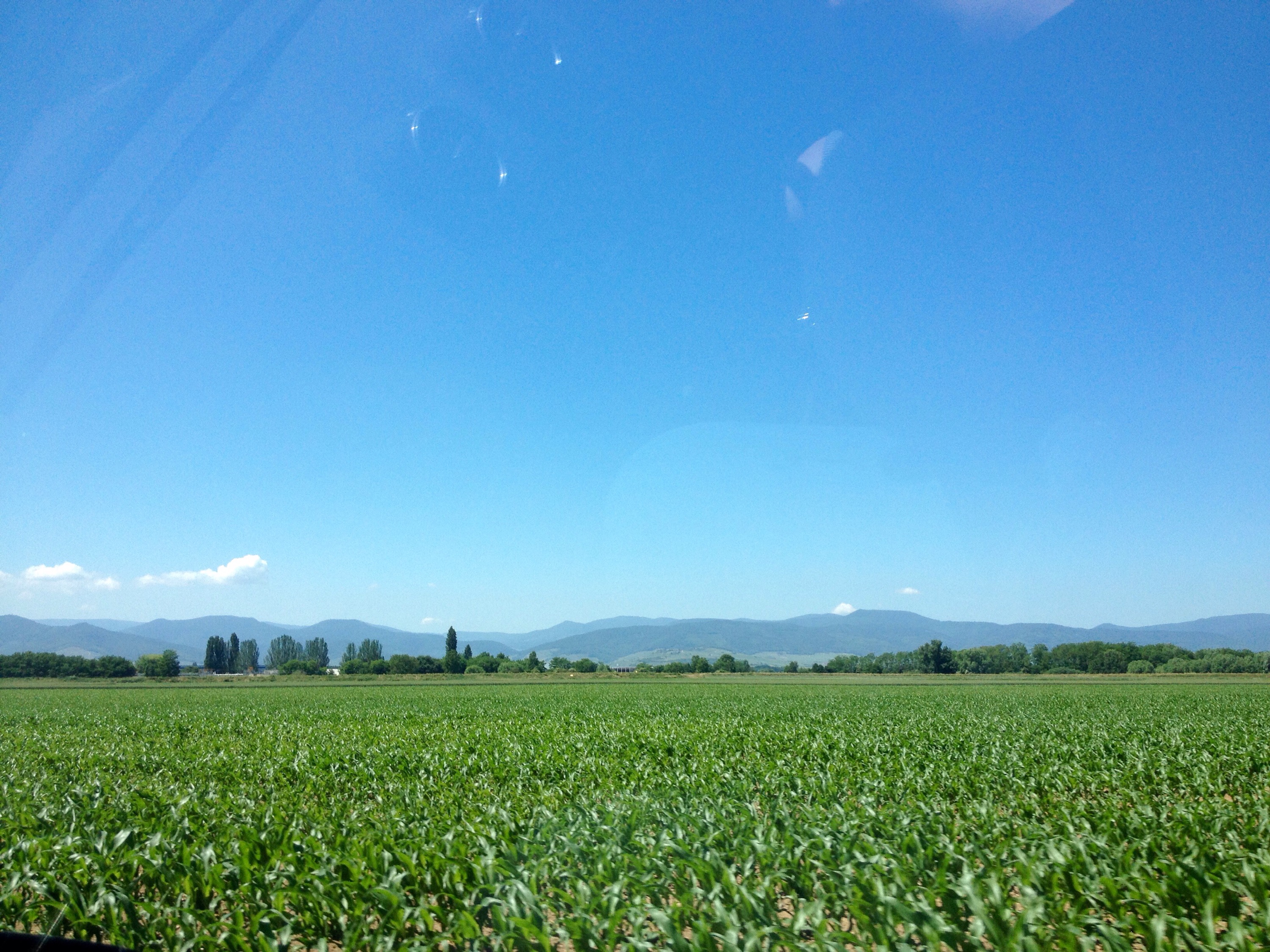 The car was thirsty and we needed some lunch so we stopped in a village called Markolsheim, we actually missed the turning for a supermarket and were trying to find it when suddenly we were travelling through a beautifully colourful town. Germany haven’t adopted coloured homes as much as France has, every now and again you’ll go past a couple but this little town had many. 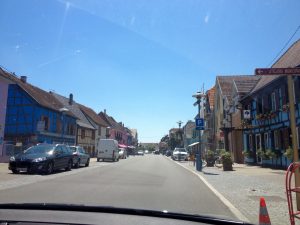 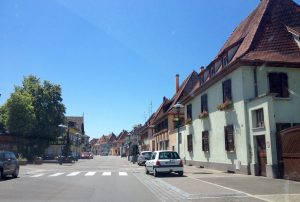 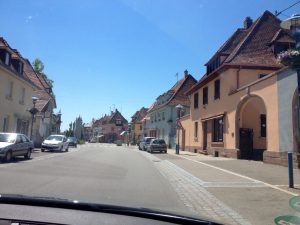 It luckily happened to be lunchtime so we could stop in at a Boulangerie to buy bread, and here’s a tip, always go to the shop with the longest queue, you’ll get the best bread there. In addition to the best bread you might also find some delicious treats and my personal favourites Chouquettes, a little ball of choux pastry sprinkled in nib sugar, basically a profiterole minus the filling and sauce, I promise you these things are the best. We always end up with a bag of ten, I even managed to squirrel some away for the trip home. 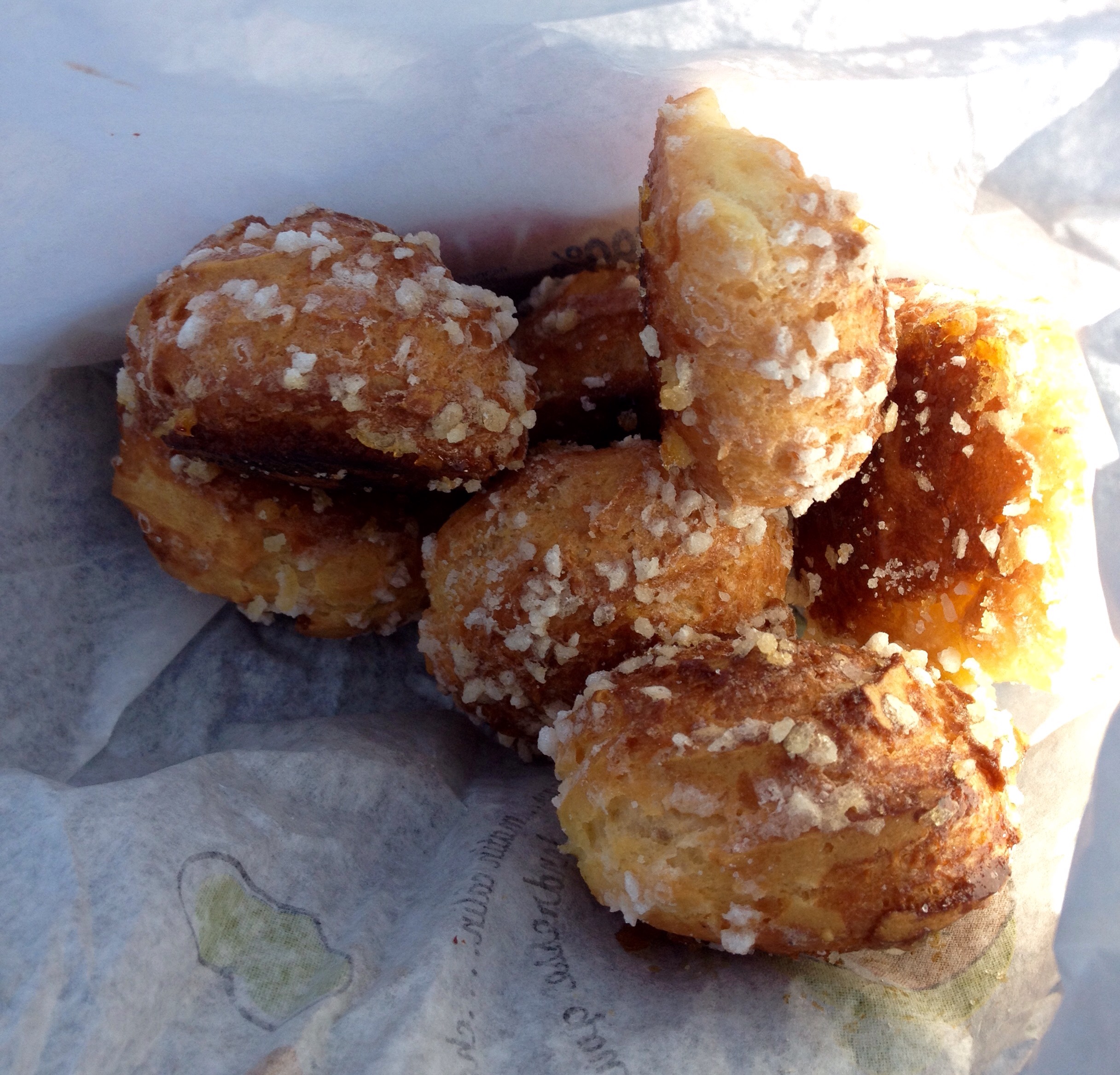 We were heading for the town of Colmar which is located in France’s Alsace region. It is very easy to see both the French and German influences in the area, architecture, food and language all give you obvious clues, and the mix of the two cultures makes for some interesting results. Whilst the official language is French, you will also hear German and Alsatian being spoken, and an awful lot of English, it is definitely a draw for tourists and I would recommend a visit in low season to avoid being surrounded by American tour groups.

We found a central underground carpark ‘Mairie’ because you don’t usually get more central than the town hall (and that turned out to be pretty cheap), which took us straight up into Monoprix which is one of my favourite French shops. After buying some drinks we ventured out into the heat, it was hot. That kind of heat that hits you like a wall coming out of an air conditioned shop but in the shade it was lovely. 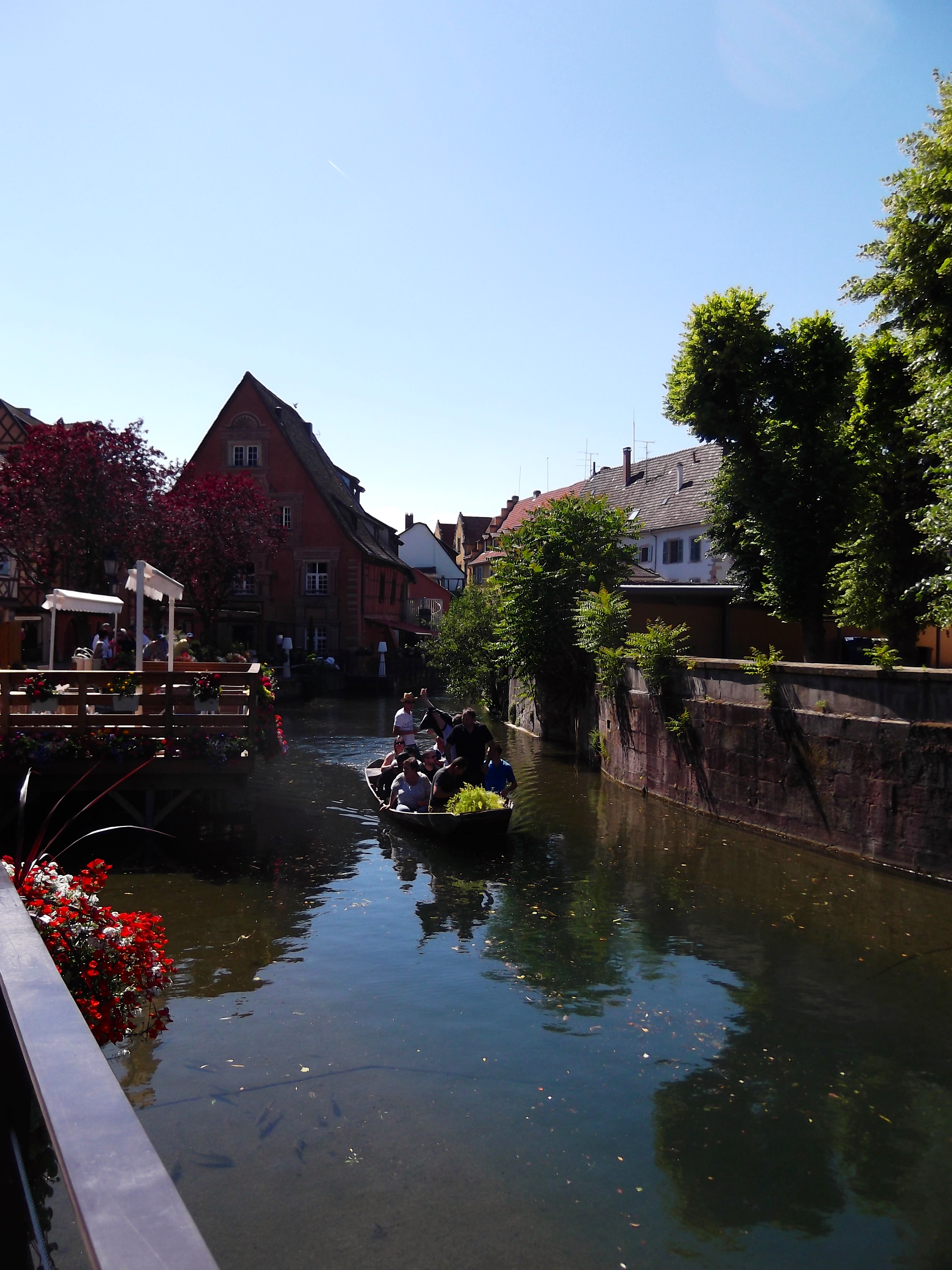 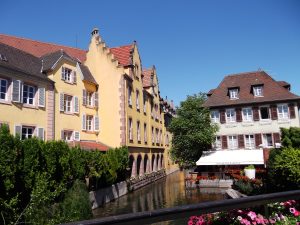 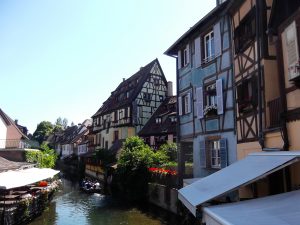 Little Venice lived up to it’s name, it really could be named very little Venice but it was a lovely walk along the very shallow river. If you look closely at the first picture you can see just how shallow the water is, you can see the fish really clearly. The river runs along side the market hall, which I suppose was very useful for transporting goods in days gone by. The market hall itself had a really good range of produce, French (obviously), Spanish, German along with a food from much further away. If it had been cooler in there we would have stayed longer but we just bought drinks and went back outside to find the breeze. 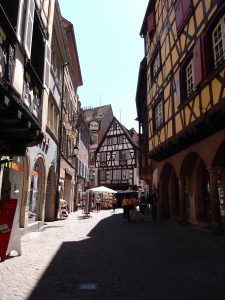 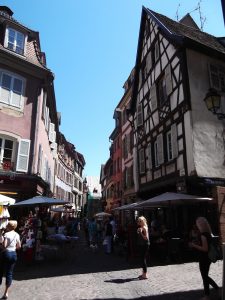 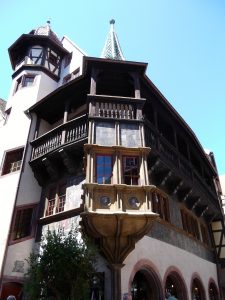 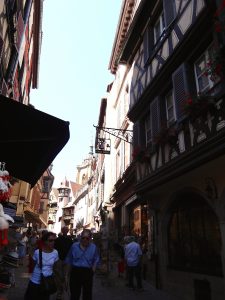 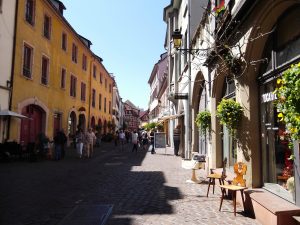 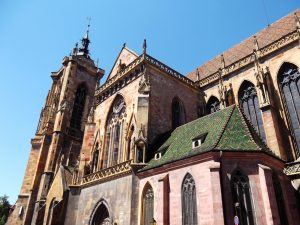 Like I said the architecture is at times German, then French and then a mix of the two. Coming from Cheshire I can’t help but love the half timbered buildings with impossibly small windows and wonky floors, if you love Colmar you’ll love Chester too! As you can see some of the main streets were very busy with tourist traffic so it was a nice surprise to find some quieter streets which were just as pretty nearby. As with any touristy areas places to eat off the beaten track are usually better value for money, we saw some amazing Moroccan and Syrian places which we’ll definitely visit next time. 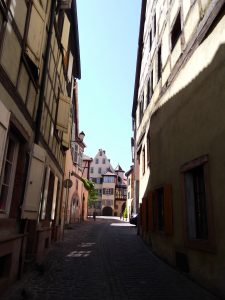 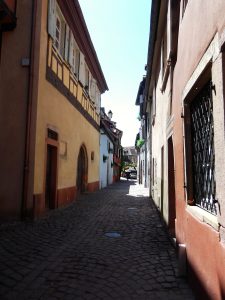 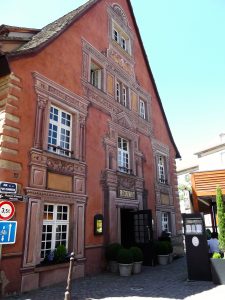 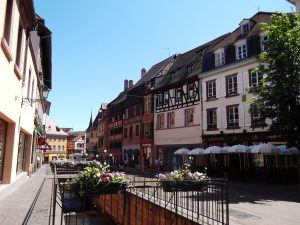 We also snook a look at the courtyard of the Bartholdi Museum, and decided against a tour since a coach load of tourists appeared soon after. Auguste Bartholdi, a French sculptor, is most famous for designing the Statue of Liberty and the museum contains some of his models, furniture and equipment. The courtyard boasts a sculpture called Les Grand Soutiens du Monde, the World’s Great bases which represents Justice, labour and the Motherland. 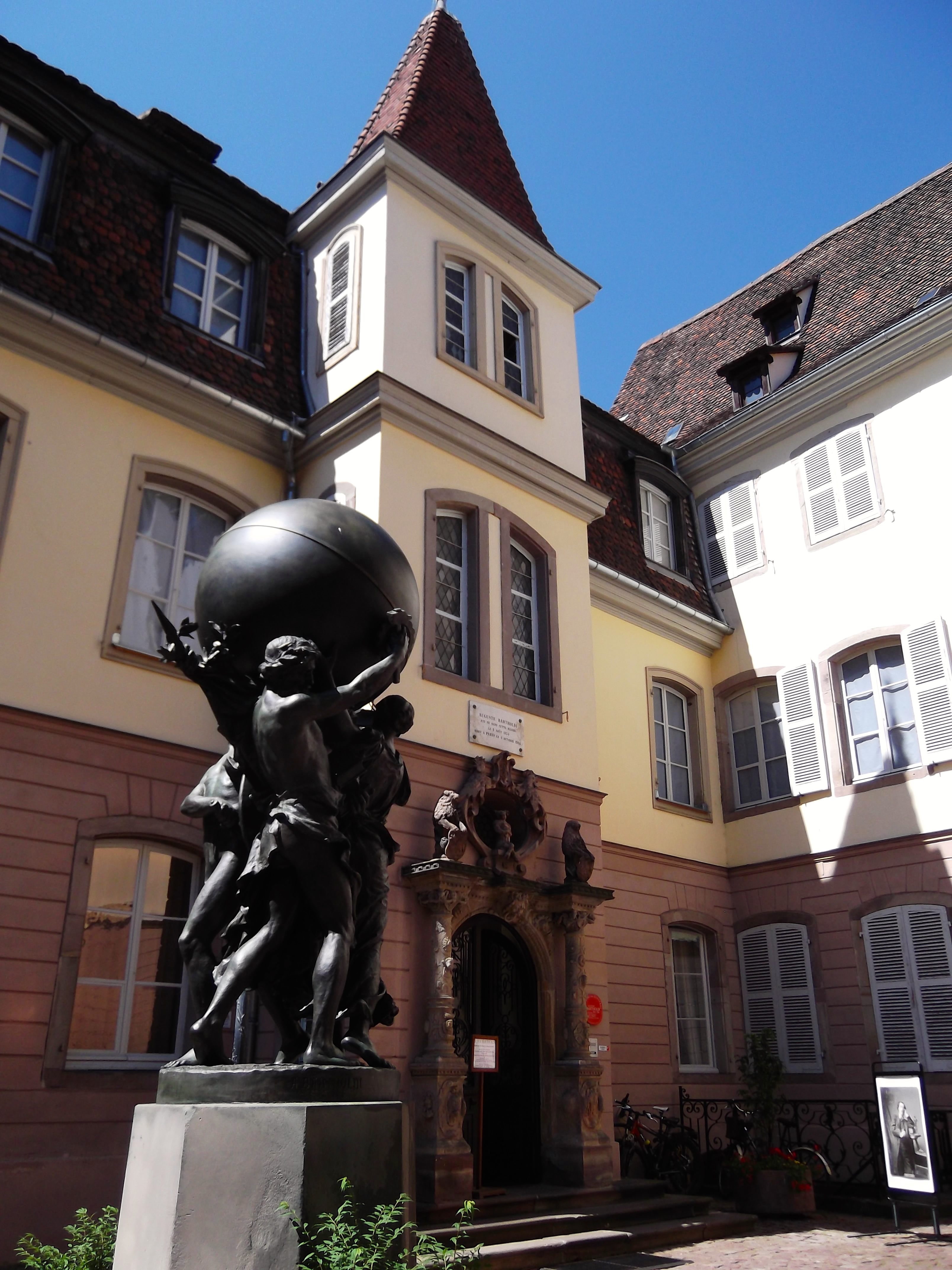 I managed to get one shot of a stork, well of its backside anyway, from a nest on top of the cathedral, always look up when you’re checking out a new city, you might also see a contortionist trying to escape from an attic? 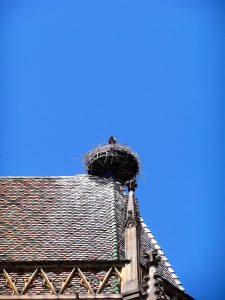 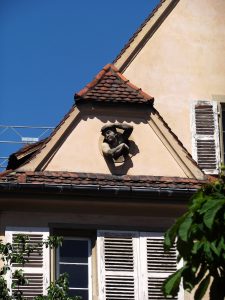 Colmar would make a lovely town to visit for a weekend but it is quite small and all the main sights are easily accessible so it’s perfect for a day out, especially in the lovely weather. Heads up to this marvellous cafe which provides it’s customers with straw hats (there on the tables) in the summer months. 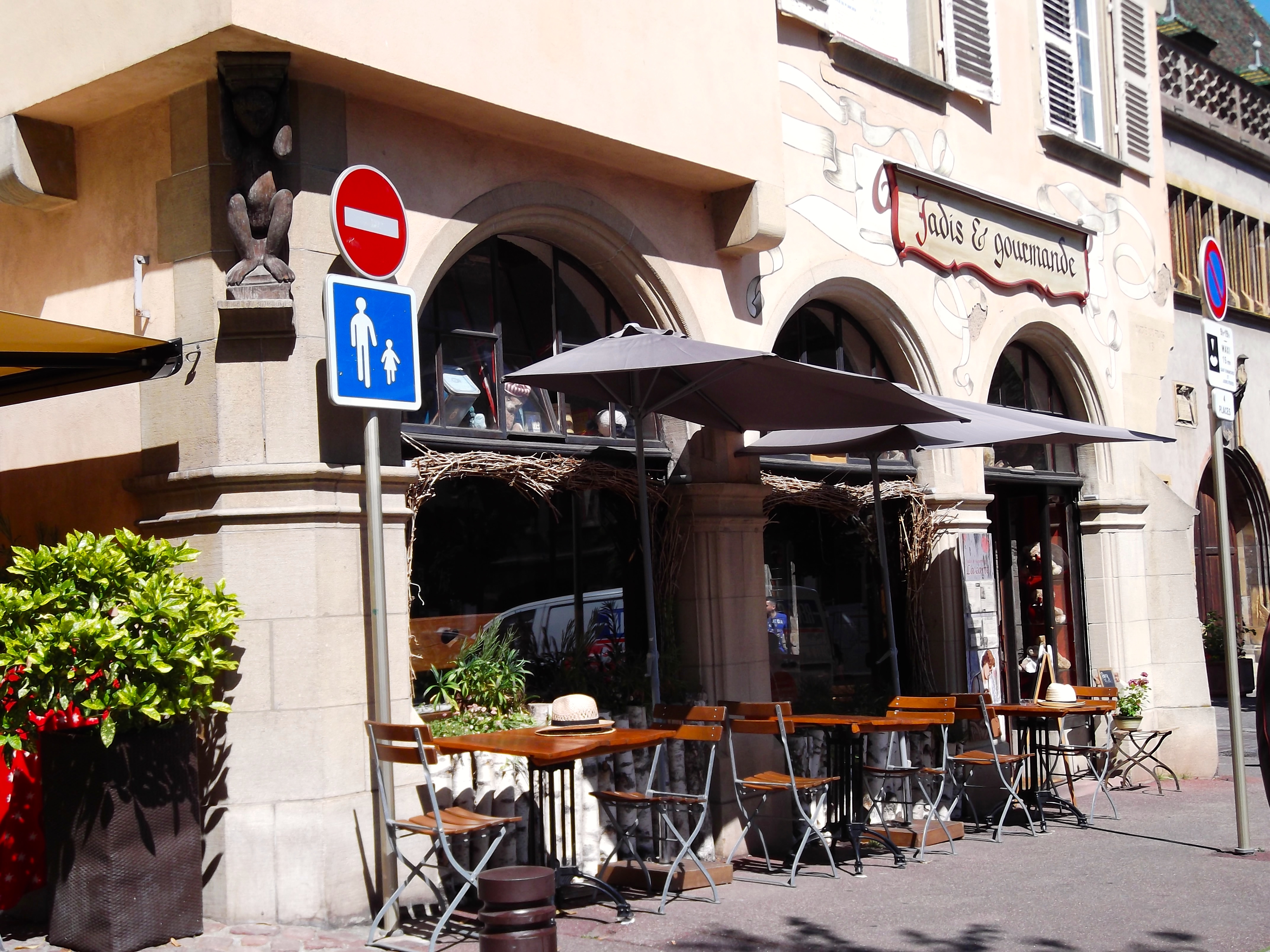 Since we had parked underneath Monoprix (and they had air conditioning) we did a little shopping on the way back to the car. I’ve mentioned before about finding foods from home in different countries and Monoprix (as with most French supermarkets, Cora, Carrefour, SuperU etc) has a good international section, at least for British goods, I picked up some Hartleys jelly, they also stock in their regular stock English style bacon, Digestive biscuits and other bits and bobs, I also have a soft spot for their green flavoured teas. They also stock Rimmel which is surprisingly hard to come by around here, I used to buy it years ago in Galeria Kaufhof but it disappeared and never returned. Anyway it was just fun to do a bit of shopping when it’s verboten in Germany. 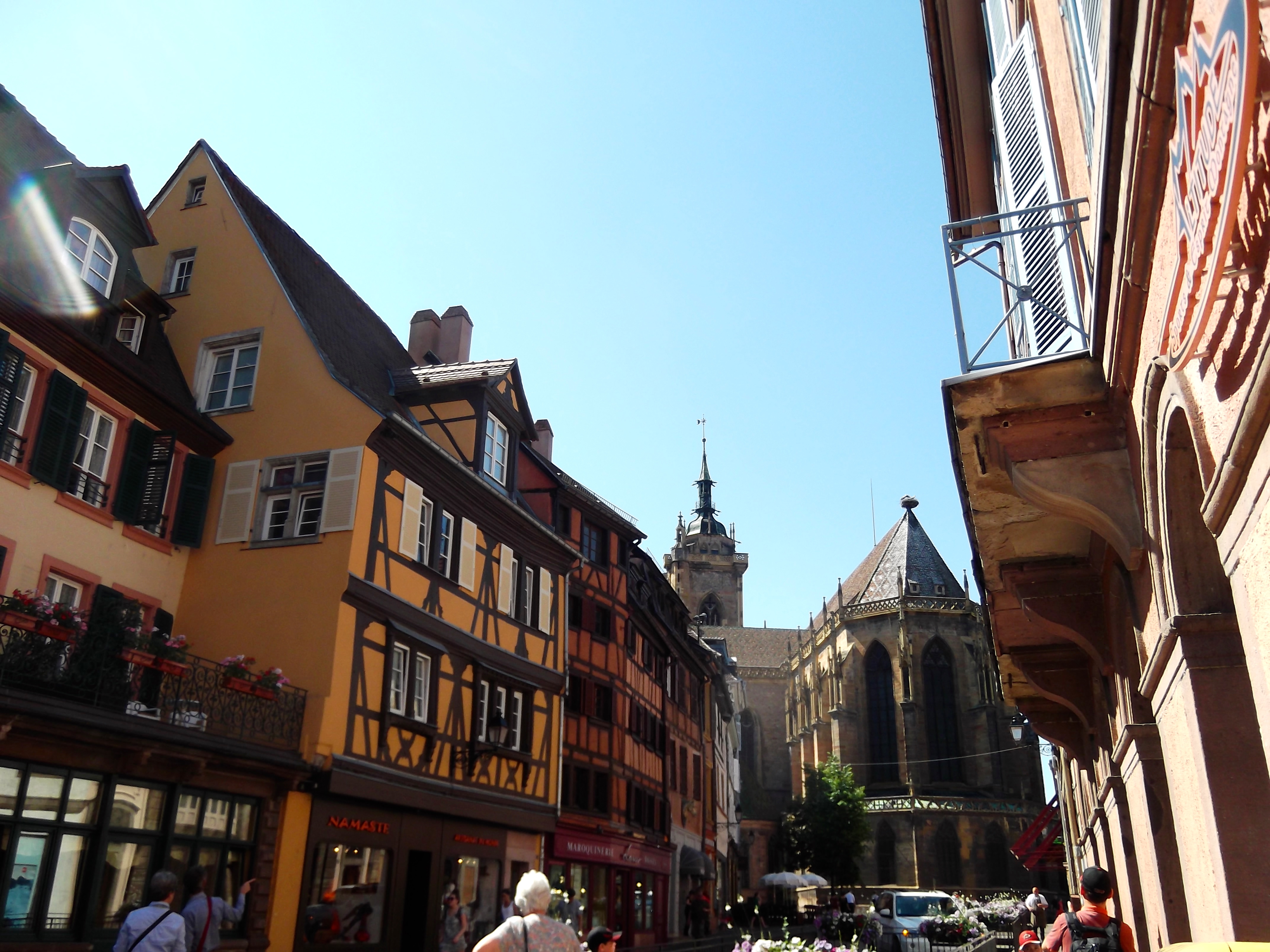 Well worth a day trip if you’re staying in the region, very convenient from Strasbourg, it will only take you around half an hour on the train. Apart from a traffic jam on the way back which added an hour to our trip, when those left over chouquettes came in useful, the road trip was uneventful again, those Autobahns, insanely fast but they work.

Have you been to Colmar?

4 thoughts on “A little French excursion”