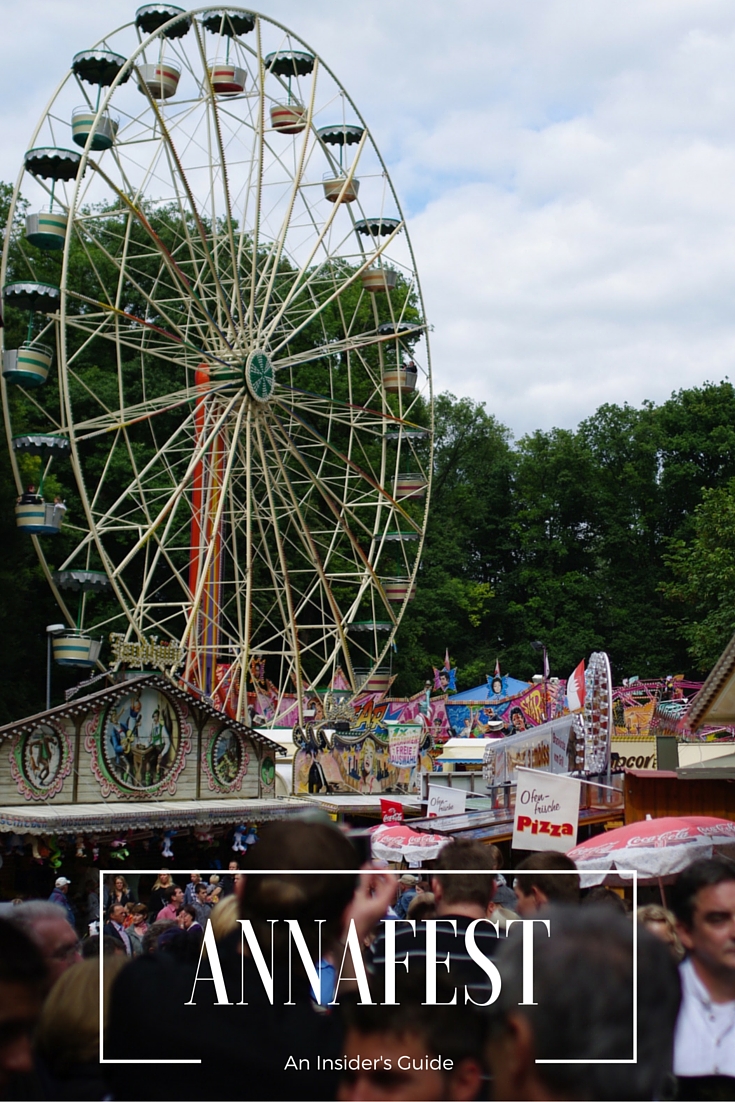 If you want a festival with history behind it you can’t beat the Annafest in Forchheim, Bayern. In celebration of the feast day of St Anne (mother of the Virgin Mary) Annafest is a 10 day long beer festival held in the Forchheim Kellerwald. The Kellerwald is a hilly forest on the edge of town, where the local breweries traditionally, and some still do, store their beers in the various cool Kellers which run through the hill. With an expected attendance of 500,000 people, it really is the place to be locally.

Annafest has a different kind of atmosphere to the larger more commercial beer festivals, even to the Bergkirchweih in Erlangen. It is undoubtedly more local, you won’t hear an awful lot of English being spoken, but it is one of the most welcoming festivals in Franconia. And just FYI the Kellerwald is also open May-September so you can enjoy a lovely beer without the crowds and organised chaos.

The Kellerwald, where the festival takes place, is approximately 2km from Forchheim train station.

On foot – An easy, but not particularly picturesque walk, it is clearly marked and generally you can just follow the crowds.

By bike – Bikes are not permitted to enter the Kellerwald, parking is at your own risk,

By bus -There is a regular service from the train station to the Kellerwald,  you will have to pay 1.80euro euro for a one way bus ticket (less for kids). The bus is generally extremely full so you may just get a free ride 😉

By taxi -There are plenty of taxis at the train station, they charge a fixed fee to get you to the Kellerwald (usually 6-8 euro) so if you are in a big group it can work out cheaper than the bus.

By car – There is not a great deal of parking near the Kellerwald but in Forchheim there are car parks, but you will have to walk or get the bus from there too.

Sensible footwear, it’s in a forest and on a hill, you have been warned.

Tracht (Lederhosen and Dirndl) for the whole family are common. Of course Tracht is not mandatory, wear what you are comfortable in.

There are covered areas in the Kellerwald, but if the forecast is for rain, take a jacket. 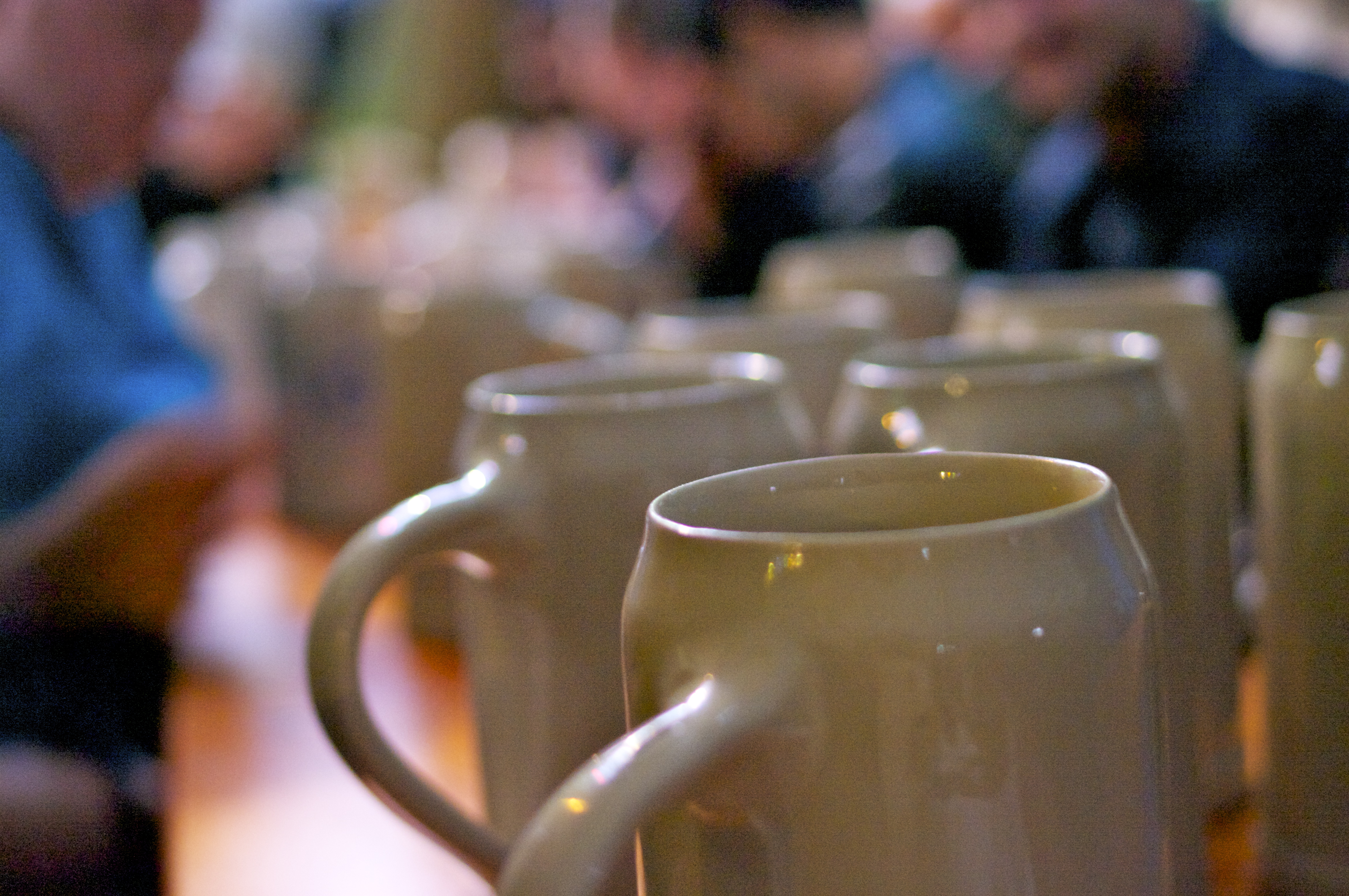 There is a refundable deposit or ‘Pfand’ on your mug, glass, bottle or plate. Mugs and glasses are generally 5 euro, other bottles and crockery is usually less. Always return you items to get back your pfand, look out for ‘Ruckgabe’ to make your returns.

For a more refreshing and less alcoholic drink try a Radler, a mix of half beer half lemonade. You will also be served this by the Maß, ‘Ein Radler bitte’ and it will usually come with a straw in it to indicate it’s a Radler. Tip – If you get rid of the straw no-one will be any the wiser that you’re drinking shandy. A Radler will cost the same as a full beer and have the same deposit on the mug.

Other alcoholic options are Weißbier (wheat beer) which is usually served in 0.4l or 0.5l. Wein or Weinschorle, the latter is mixed with lemonade for a suß (sweet) schorle or sparking water for a Sauer (sour) version, both equally refreshing and a nice alternative to beer.

Apfelschorle is my favourite of the usual fizzy drinks and water, half apple juice, half fizzy water. Tip – If its hot, sometimes you can order a Maß of apfelschorle, otherwise you usually get a 0.5l.

Toilets are 50cents a go but will generally be clean and well kept, the queues can get long for the ladies (such is life) join before you’re desperate.

Know how to toast in German, a hearty clink of stone mugs and a “Prost” Oh and make sure to keep eye contact with everyone one you toast with, otherwise 7 years of bad sex is coming you way (that’s what they say anyway). 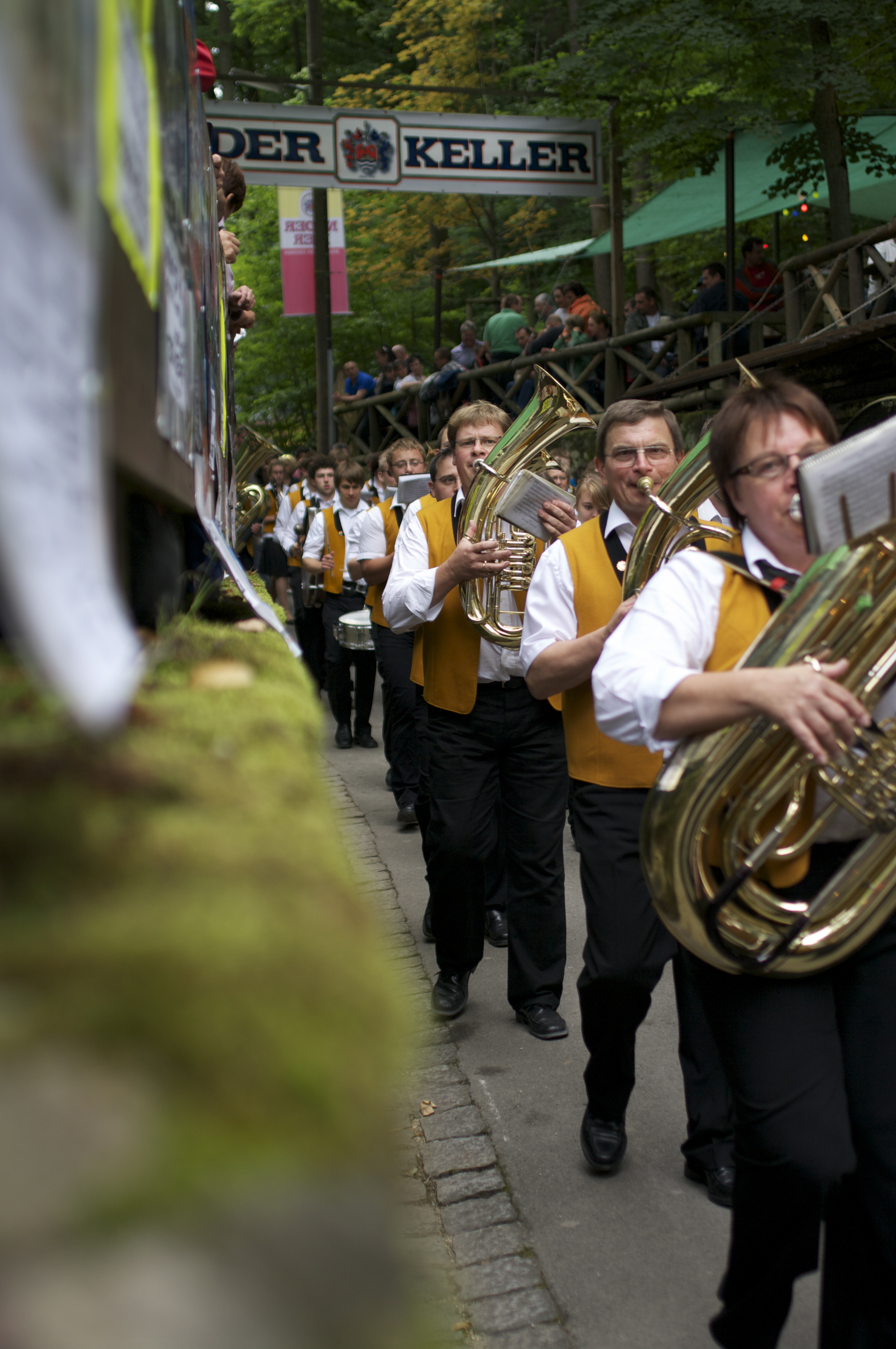 You will hear the bands play this at least once an hour, learn it and sing it loud!

Neder-Keller is a party Keller, it is not really suitable for kids after noon, plenty of dancing on the benches and live music though!

The walk up through the woods is mostly tarmac so suitable for pushchairs etc but parts are steep so have good brakes.

Bikes are not permitted at Annafest, if you ride there you must leave your bike at the bottom of the hill, there are too many people to ride it up and down anyway.

Dogs are not permitted at Annafest, so leave your furballs at home.

You won’t find cash machines (ATMs) in the Kellerwald, be prepared.

Have a plan, there is no way you can try all the Kellers in one day so pick a selection, this will help.

Eichhorn-Keller to sample the Eichhorn beer, I love this stuff, true amber nectar as far as I’m concerned. Their biergarten is pretty chilled and does good food, it even has a sandpit for the kids.

Neder-Keller, their Schwarze Anna (a dark delicious beer) is something to try, it looks like Guiness but tastes completely different, I love it.

Grief-Keller, pretty much the first Keller you come to and they do a lovely refreshing beer, it’s a perfect start to a beer festival.

Look out for Bock biers, these are VERY strong, delicious, but one is usually enough.

The parade on Saturday 23rd July 2016 is full of traditional costumes and musicians, if you don’t want to follow it from town, the Greif Keller which overlooks the path up to the Kellerwald will give you a good view. The musicians also parade through the Kellerwald, you’ll hear them coming. 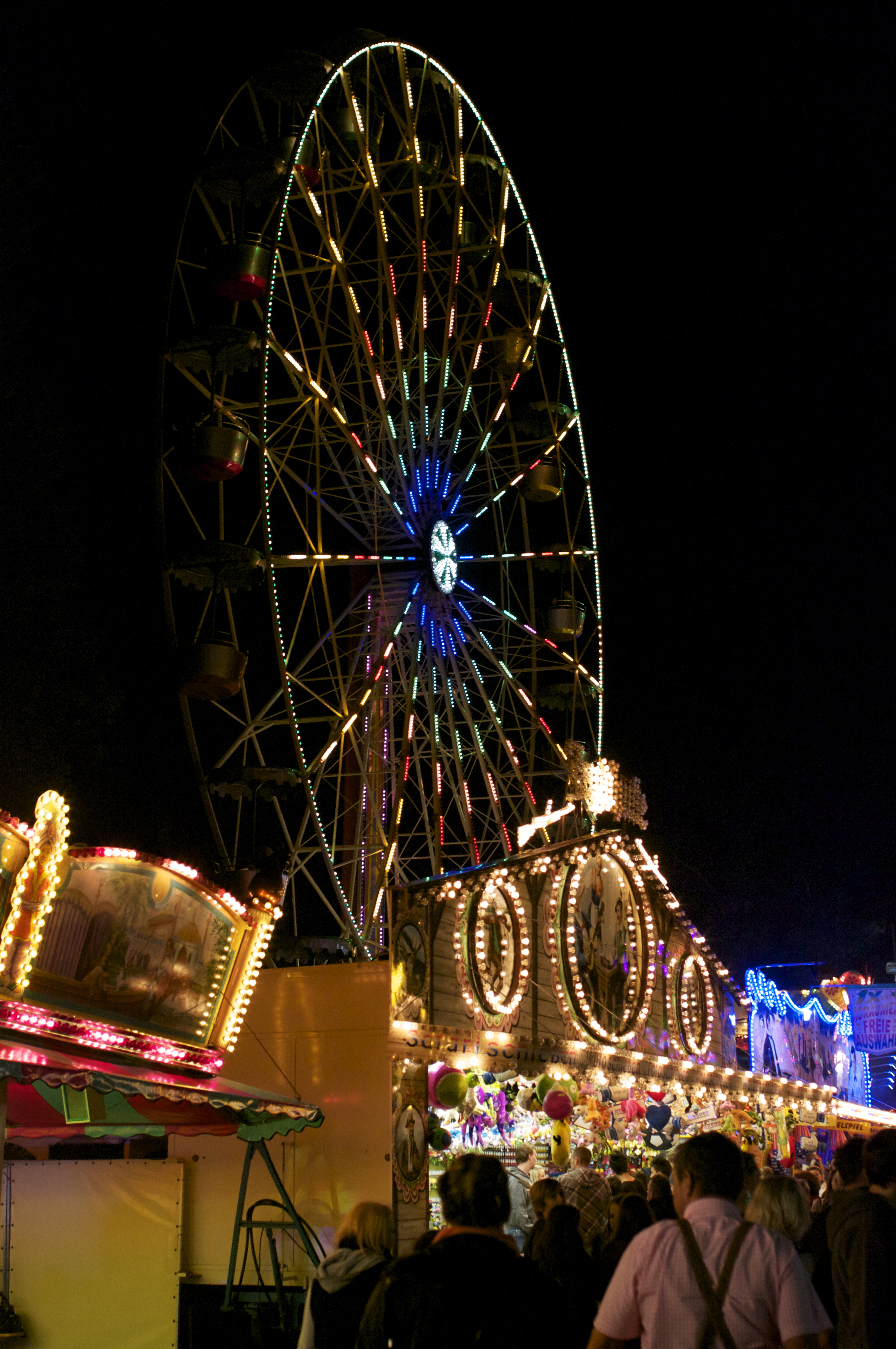 The official opening and tapping of the first barrel is at 5pm Friday 22 July 2016. This year the mayor will tap the barrel at Schindlers Keller which is usually a quieter Keller so theres a good chance you could score a free Maß!

The parade from the town to Annafest starts at 1pm on Saturday 23rd July 2016.

Family days are Tuesday and Thursday 1pm-6pm, lots of the rides will give family discounts during these hours.

Wednesday is the Forchheimer Tag, lots of the shops in Forchheim will close at noon so that the workers can enjoy an afternoon at Annafest.

Let me know if you have any more questions about Annafest, and if you plan to visit have a great time!

6 thoughts on “Insider’s guide to Annafest”