Want an alternative to a traditional beer tent type beer festival? Happy to put a little leg work in to get to an awesome reward? Walberlafest is just what you’ve been looking for.

This is the lowdown, this is an insider’s guide to Walberlafest.

On the first weekend in May the surprisingly positioned and oldest spring festival takes place in the Fränkische Schweiz, combining wonderful beer with some of the best views in the area. Walderlafest is something to be experienced. Walberla itself, is one of the double peaked hills of the the Ehrenbürg (the other is called Rodenstein and whilst similarly lovely doesn’t have it’s own beer festival) which are located in Upper Franconia, about 10km from Forchheim. 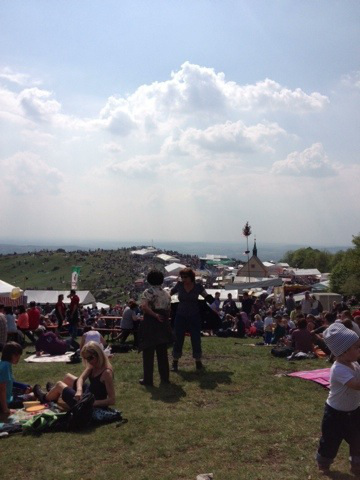 The site has some serious history behind it and there has been archaeological evidence of settlement as far back as the Bronze Age with celtic fortifications still visible today. The festival itself can be dated back to the 9th century, making it the oldest May festival in Germany, and is celebrated yearly on the first weekend in May. It is now a pilgrimage made by both locals and tourists alike. You’ll be surprised with what you find on the top of the hill, I promise.

By train – Head for the small village of Kirchehrenbach, if you are travelling from the Erlangen/Nürnberg direction you will most likely have to change trains in Forchheim, from other directions you may change in Ebermannstadt, both trains will take around 10 minutes. These trains generally only run once an hour so be prepared for crowded trains from Forchheim/Ebermannstadt if you are travelling later in the day (Hint – travel earlier to avoid the crowds).

By bike – Places to park a bike are easier to find than for a car, just do us all a favour and leave you bike at the bottom of the hill.

By car – There is no official parking for the event so go early to find a legal space. Kirchehrenbach is a small village and doesn’t have very much parking.

Important – However you travel to Walberlafest you can’t get away from the walk to the top (don’t worry that’s where they keep the beer). The walk itself is only about 3km some of it is quite steep (particularly the last 500 metres or so) and whilst most of the paths are in good condition, depending on the weather some parts can be a little rough (that last 500 metres or so again). 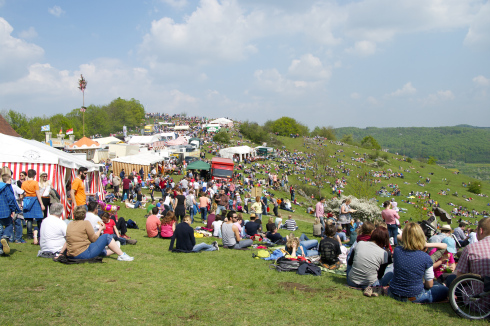 The event is on a hill in the countryside, there is limited shelter so you are very much at the mercy of the elements, plan accordingly.

Take suncream and a waterproof, hey a coat doubles as something to sit on and it’s a long way down in the rain without one.

Sensible footwear, you can’t get out of the walk up there (it’s totally worth it) but to ensure your feet are happy wear some practical comfortable flats, you don’t have to have hiking boots, a decent pair of trainers or pumps will be just as good.

Whilst I’ve seen Tracht at Walberlafest it’s not hugely popular, maybe a day to leave it at home. 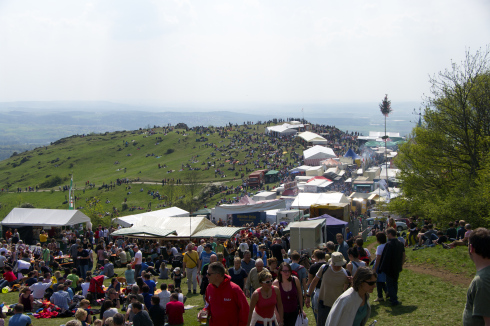 The location is a protected natural landscape, always keep to the marked trails.

Dogs are welcome at this festival, they must remain on a lead at all times though.

Pfand still applies, even on the top of a hill, return your mug to get your Pfand (deposit) back

Take money, there is a Sparkasse cash point in Kirchehrenbach but not on the hill (and it’s a long way down), get your cash before you set off.

As with most beer festivals it is family friendly but some of the ground can be uneven and rocky, plan accordingly.

Take a picnic, food is your regular festival stuff, lots of chips, pork and pretzels, take your own if you want something different.

Take a blanket to sit on, festival seating is limited so go prepared.

Try the Schwarze Anna from the Neder Brauerei, it’s a Schwarz beer (obviously) and looks like Guinness but tastes much much lighter, it’s one of my all time favourites. 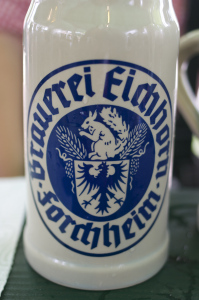 If Schwarz beer isn’t your thing head on over to the Eichhorn Brauerei or the Brauerei Greif because they both do wonderful Hell beers, which also make delicious Radlers.

Take a bottle of water for the walk up, a lot of it is in direct sun and if it’s hot you’ll be glad of a drink half way up.

There are two paths up, a steeper incline and a gentler path, both merge near the top anyway but the gentler path is wider and more suitable for pushchairs and has better views for photographers. Both are marked and/or obvious.

The fest takes place on the first weekend in May.

It begins with the raising of the Mai Baum (May tree) which takes place on the Friday evening and the first barrel is tapped shortly after.

Officially the fest opening hours are 10am-11pm and a church service is held at the chapel on Walberla at 9am Sunday morning.

Whilst Kirchehrenbach is the closest station many people choose to park in nearby villages and walk the additional distance, the surrounding area is pretty flat so on a nice day that’s definitely an option, the choice is yours.

Have a wonderful time at the fest, I’ve loved it every time I’ve been and I’m sad to be missing out this year. If you head down, let me know how it goes, I’m very jealous!

9 thoughts on “Insider’s guide to Walberlafest”