Tomorrow is a significant day. For the UK and for Europe. To my small but significant readers in the UK please go and vote tomorrow.

As one of the three resident Brits in a small town in Baden Württemberg I admit I probably stick out more than I imagine. Yes, I carry my reusable shopping bags, buy my fruit and veg at the local market and greet people in the Doctors waiting room but my accent gives me away every time. Up until now five times out of ten, my foreignness is ignored, its irrelevant to my purchasing of strawberries, washing up liquid and butter and it rightly goes uncommented on.

Suddenly it seems I’m not as inconspicuous as I’d hoped, and I’ve become interesting to the general public. I had a lovely conversation with another Brit on the phone as I walked up to the bakery this morning, and hung up maybe a minute after I joined the giant queue that snakes around the shop. Little did I know that I’d already been clocked. I eventually made my purchase and as I turned to leave found myself blocked by two elderly German men, one little and one large.

I tried to bypass them, nope (damn you giant queue), asked politely in German if they could let me pass, nope. They simply smiled at each other and yet didn’t move. At this point I’m looking around for a hidden camera and wondering if I could take the little one and get to the door before large got hold of me. Then in perfect and extremely loud English large says “Are you from England?” Now I’m confused, how did he know? was I inadvertently wearing a flag? Did I drop my passport? Where is that hidden camera?

The ‘Ja’ I uttered was bathed in suspicion and accompanied by a scowl of confusion and quickly followed up with a “could you please let me past?” No chance, since their numbers had doubled (the wives I assume).

Little “How will you vote tomorrow?”

Large “Will you be able to vote from here?”

Everyone in the bakery, which, fun fact, includes a cafe which was at capacity, has stopped talking, complete silence. Everyone in the place is staring. I’m getting redder and redder.

Me “I’ve voted, my postal vote was sent weeks ago, can you please let me past?”

Large “We want you to stay, we think Europe is stronger with the UK in it, it would be a sad day if you decided to leave”

Random lady in the queue “Yes, we would like you to stay”

Murmurs of agreement from the queue, the people in the cafe and the staff.

Large “Would you leave? if your country chooses to leave?”

Little “What would happen to you?”

Me “Erm, thanks again (awkward wave gesture to the entire place), I have no idea what will happen if the UK chooses Leave, no one does really, I can only vote and wait”

Little “Would you want to stay?”

Me “Erm, thats a bit of a loaded question, I’d like to continue having the option to live here easily and without much hassle, and I’d like the rest of the UK to continue to have that option too, should they so wish”

Large “You voted to stay in then?”

Me “Of course, but I can’t speak for the rest of my country”

Me “Thanks, I really should get back, so if I could just….”

And just like that the sea of grey parted and I could at last leave the shop.

I’ve always been conscious of being a foreigner in a foreign land here in Germany. Opening my mouth will forever give me away, however fluent my German gets. All discussions about immigration and integration with Germans has always been under the caveat of ‘but I don’t mean you’. Wow, thanks, do you realise how offensive that is? I have mountains more empathy, sympathy and compassion for anyone struggling to learn English or to establish themselves in a new country, and it doesn’t just apply to those who come from certain countries.

Would people of the same age in the UK feel like the people in my local bakery? Who knows? I can only judge based on my family, who with both daughters and a son based in mainland Europe, and not enough spare rooms to take us if we all had to move back, they may not be an unbiased group. I voted to remain and I would have done even if I didn’t live in Germany and personally enjoy the advantages of free movement. I’m not averse to the possibility of change and of one day leaving, but now, both options seems to be based on fear and hate rather than fact.

I’m nervous, uncertainty is not fun, but by this time on Friday I’ll know one way or another.

Whichever way you vote, do vote.

And, I just had to add my absolute favourite EUreferendum related funny from the fabulous illustrator @veronicadearly 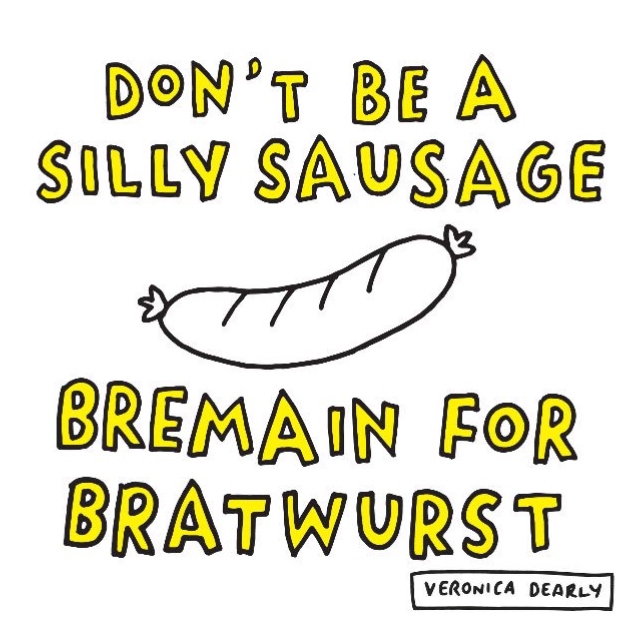