I posted this picture on Thursday, I never imagined that I would wake up to a country on the path to becoming separated from the EU.

I don’t usually call my husband a liar as soon as I wake up, I don’t usually exchange expletives via text with my parents, I’m not often completely lost for any word other than the four letter variety, but, there really is a first time for everything, and last Friday morning was just that.

What now? That was, and still is, my only question. And then the Prime Minister resigned. So in addition to (as far as I can see) no plan, there is now no leadership of the governing party. The opposition at least waited a couple of days to implode, thanks for that, I’m not sure I could have taken much more on Friday morning.

MrC and I were heading to Bayern anyway, so thankfully neither of us had to endure a workplace full of questions until after the weekend, small mercies. The journey takes about 2 hours and we spoke about 4 words to each other the whole way there. What could we say, other than the obvious? Sound bites from Farage on the radio were weirdly similar in delivery to something that I’d heard before, Oh wait, that’ll be from the Dokuzentrum in Nürnberg.

What now? was the only question I discussed with Brits that morning. Yes remain voters accept that it’s a two year process but come on, someone has a plan, right? The Bavarian (who is actually British too) was greeted with hugs and sadness when she picked up her littles from their international school on Friday. The car journey back was similarly quiet to the first (highly unusual for us)

One thing that I can’t get over is that more ‘Leave’ voters aren’t livid. Campaign promises were being reneged before 10am on Friday and yet a win was still being celebrated. I wish I could believe that the majority of people who voted that way did so for sensible economic reasons, not because they lapped up the tabloid version of the Referendum which effectively said ‘Make Britain great again, by getting rid of all those immigrants who are taking our jobs/houses/money and sticking two fingers up at Europe because we are an Island and better than them’.

There is a lot in the news about racism and hate towards immigrants in the UK. When the mainstream press love a sensational headline above actual news though, it can be hard to work out what’s true. So when I saw a post of Facebook from an old school friend (you’ll find it below, edited for privacy, used with permission) I was upset, angry and ashamed beyond belief that this had happened in my hometown. I don’t care which way you voted, racism and xenophobia are not a way forward. 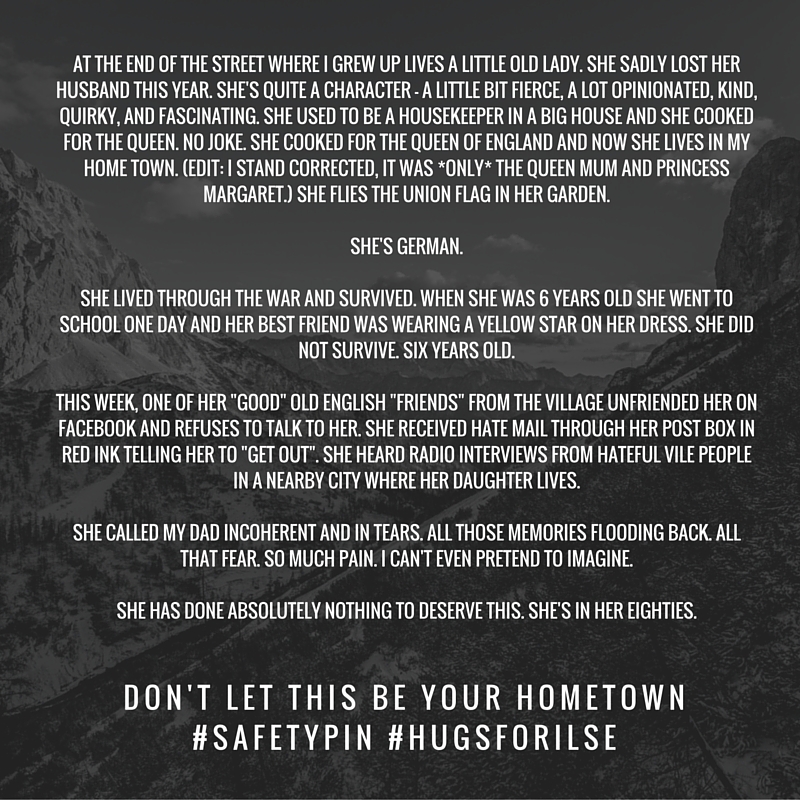 One sparkle of hope for me was that within my age bracket more voted for remain than leave, that I’m not alone in my views and not the only one holding onto hope that something good will come of this. I’ve given up being disappointed by the older voters who came out in droves and voted leave, my disappointment is  directed at the turnout in younger people, the ones who will have to deal with the consequences of this mess, mostly failed to turn up at all.

What now? There’s still no plan. The country is divided, families are divided, political parties are in chaos and still no plan. I can hold on to a little hope of a second referendum, the result being bypassed (because after all it is only advisory not binding, and I’d love to see the outright blatant campaign lies challenged in court) or just an actual plan! Something, anything, other than the game of ‘you do it’, ‘No you do it’, ‘No you do it’ which is currently being played.

Overnight my passport country cut off it’s nose to spite it’s face. The consequences so far include uncertainly in the market, uncertainty of leadership and uncertainty for the future. Whilst I’m glad some of the UK feels happy that they have ‘won’ and been heard, I’m not sure they actually know what they’ve won and I’m fairly sure no one knows how this will all pan out in the short term or the long term.

It’s almost like one side didn’t actually mean to win. What now?